DSG honours entities participating in its stand at Gitex 2014

After welcoming the attendees, Bin Humaidan commended them on their performance during Gitex 2014, which signified the vision of HH Sheikh Mohammed Bin Rashid Al Maktoum, Vice President and Prime Minister of the UAE and Ruler of Dubai, to shift to the smart government and Dubai Smart City; and implement the directives of HH Sheikh Hamdan Bin Mohammed, Crown Prince of Dubai and Chairman of Dubai Executive Council, to speed up fulfilling the Dubai Government towards 2021 vision. 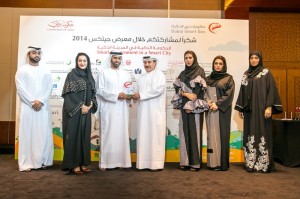 Bin Humaidan noted that DSG had prepared an experienced working team, which was tasked with providing integrated services in co-ordination with the working teams in those entities towards achieving the connected government’s objective for government services to be implemented through a single sign-on and one mobile, under one roof with the aim of fulfilling the government’s ultimate goal of easing the lives of customers and making them happy when obtaining government services.

Following a short documentary that recapped a successful Gitex 2014, Sumaia Bin Hammad, Director of Communication & Business Development, and also the DSG Gitex team leader, mentioned a few major achievements of the stand: As many as 13,000 people visited the DSG stand and learnt about 65 smart device apps. 24 agreements/MoUs were signed, while 19 departments gave over 300 smart devices to lucky winners. The media coverage extended across audio, visual, web and print mediums including a dedicated website (gitex.dubai.ae) and a daily smart government TV programme on Sama Dubai channel. The satisfaction rate of the participating entities was 84%, based on the feedback surveys.

Bin Humaidan honoured all the teams representing the departments and entities. He also honoured 4 additional categories in appreciation of their efforts in specific fields: the best entity participating in the stand, best working team coordinating with DSG, best coordinator of the government entities participating in the stand and the best exhibitor at the stand. In addition, Bin Humaidan honoured Dubai World Trade Centre for its efforts and the facilities it provided to make a success of the stand, Kingsmen Co, which designed and implemented the stand this year, and the group of media entities that played an effective role in the media coverage of the stand during the exhibition. These included MEMS; Sama Dubai; Al Emarat Al Youm, Al Bayan and Al Khaleej newspapers; Emirates News Agency “WAM”, Alsayegh Media and Orient Planet public relations company.