Driving pleasure captured on film: The BMW 235i Coupe at the “Drift Mob” shoot in Cape Town.

14 August 2014 - The BMW 2 Series Coupe takes brand-typical driving pleasure to a new dimension. The BMW M235i Coupe, which offers the extremely intensive experience of superior dynamics, recently put on a spectacular performance in the centre of Cape Town, South Africa. The city’s streets became a stage for a “drift mob show” featuring the BMW M235i Coupe, professional stunt drivers and a Hollywood film crew that documented the sensational happening in a video clip.

A flash mob has long become commonplace, but the drift mob is a true innovation, requiring specialised skills at the wheel and an exceptional automobile. Both of these attributes came together in Cape Town. Five BMW M235i Coupes painted in Melbourne Red drove through the city to spontaneously transform a roundabout into a film set. They were steered by five of the world’s best and most experienced stunt drivers and captured by Hollywood legend, Mic Rodgers (“The Fast and the Furious”). The result is a perfectly staged action video with smoking tyres and “goose bumps” feeling.

The BMW 2 Series Coupe’s characteristics are unique to the compact segment and deliver the substance from which the drift mob clip draws its fascination and the immediate choice was the BMW M235i Coupe. And with true masters behind the wheel and on the accelerator pedal, the controlled slipping of the rear wheels soon became artistically choreographed “formation dancing” on tarmac.

The drivers didn’t take long to become accustomed with the BMW M235i Coupe. “It’s amazingly simple to do a clean drift in this car,” says Rhys Millen, professional stunt driver from New Zealand who was a Formula Drift champion in 2005 and has regularly provided major Hollywood film productions with breathtaking action on four wheels for a decade now. “The weight balance, the steering, the brakes – everything’s simply perfect for this purpose.” And his Swedish colleague Samuel Hübinette, former touring car racing driver and record title holder of the Formula Drift Championships, adds: “The car has exactly the right wheelbase, a good suspension and is excellently tuned.”

The drift mob driver crew also included the two successful Formula Drift pilots Conrad Grunewald and Daijiro Yoshihara as well as the stunt driver Rich Rutherford who has already been involved in around 200 films to date. For stunt coordinator Riley Harper this quintet was the ideal choice. “That was a well-coordinated team, in which each member always knew exactly how and where the others were driving,” he comments.

The car combines the power of its 326hp 3-litre straight six-cylinder engine with M Performance TwinPower Turbo technology, with a perfectly balanced axle load distribution ratio, offering the ideal prerequisites for driving pleasure worthy of a film. Moreover, the in-depth motor racing know-how of the BMW M Group was used to attune both its model-specific suspension technology and the aerodynamic balance of the car body to the power unit’s performance qualities. This resulted in fascinating overall performance characteristics with handling properties that are controllable right up to the limit. 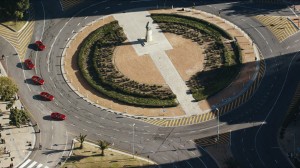 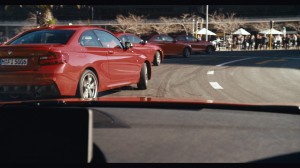 The “who is who” of Hollywood’s stunt and action scene took their places behind the wheels and cameras, led by stunt coordinators Mic Rodgers and Riley Harper, who during the course of their careers were not only involved in movies of “The Fast and the Furious” series, but also in box office hits such as “Iron Man” and “The Dark Knight Rises.”

The clip shot in Cape Town will be shown on the new online communication platform www.bmw.com/BMWstories.