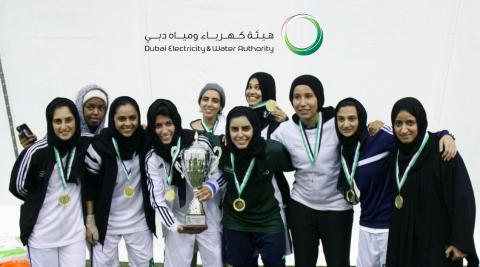 Dubai Electricity and Water Authority (DEWA)’s women’s sports team came first in the 5-a-side football tournament organised by Duplays, the UAE’s largest organiser of recreational sport leagues and amateur sports competitions. HE Saeed Mohammed Al Tayer, MD & CEO of DEWA, commended the achievement by the team, as well as the efforts of DEWA’s Woman’s Committee. “DEWA exerts every available effort to encourage its female staff to enhance their capabilities and their active participation in the development of DEWA and society as a whole. We recognise the important role women play in social, cultural, and economic development. This supports the wise directives of HH Sheikh Mohammed bin Rashid Al Maktoum, Vice President and Prime Minister of the UAE and Ruler of Dubai, to support innovation in sports, developing and encouraging sporting achievements, and government innovation as individuals and groups, locally, regionally, and internationally,” said Al Tayer “DEWA is committed to enhancing the concept of positive energy, a concept that His Highness Sheikh Mohammed bin Rashid Al Maktoum encourages by inviting employees, citizens, and residents to participate in competitive sports, bringing people together with a sense of team spirit, and achieving their goals. DEWA is also committed to encouraging its employees to maintain a healthy lifestyle by exercising and finding a balance between work and home life, this will contribute to making Dubai the happiest city in the word,” added Al Tayer. “In line with our wise government’s focus on women’s sports, DEWA supports its female professionals to improve their capabilities, and actively participate in various local and international sporting activities and events. This supports DEWA’s corporate social responsibility strategy, improves relations, and encourages values of forgiveness and integration. Events like these promote values of love and harmony in society through the language of sport, which everyone understands, regardless of their culture,” said Khawla Al Mehairi, Chairperson of DEWA Women’s Committee. The competition was held from 22 January to 15 February. DEWA’s Women Sports Team beat AC Milan, achieving a score of 10-0, and Barcelona with a score of 7-5, 6-2 and 6-1. The team beat Marvels, with a score of 5-1, and tied with Marvels and AC Milan 1-1 in separate matches.