BeitMisk champions one of their own for the Rally of Lebanon 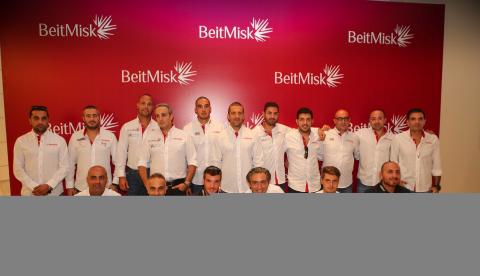 As part of its commitment to the Lebanese community, BeitMisk, held a press conference, as part of an event, announcing that it will be proudly sponsoring its employee Tamer Ghandour in Lebanon’s 38th Rally Championship taking place on the 4th, 5th and 6th September of this year. The 244 km race, comprised of two separate stages, will see the talented Ghandour speed through varying altitudes from sea level to 1200 meters, making the Lebanese Rally the most challenging event in the Middle East Rally Championship. The Motortune team kicked off the event with a roadshow around the neighbourhoods of Beitmisk, ending at the sales center for the start of the press conference. A speech was given by Mrs. Sarah Zard Manoukian revealing BeitMisk’s sponsorship to Tamer Ghandour, followed by a video introducing the driver and another introducing Motortune. The event ended with a Q&A session with all eight drivers, Robert Aaraj, Nicolas Amiouni, Gilbert Bannout, Roger Feghali, Tamer Ghandour, his co-driver Salim Jleilaty, Joseph Hindi, Nassib Nassar, and Patrick Nejim, as well as a refreshing cocktail. Being no stranger to social initiatives and engagements, Beitmisk has always aimed to support passionate and talented employees within its ranks. Tamer Ghandour is no exception to the rule and with him donning his helmet and his hands firmly on the wheel, BeitMisk – which holds a reputation for empowering and investing in its own - will most certainly back him all the way. This time, the positive contribution of BeitMisk extends beyond its surrounding community, giving Ghandour the opportunity to showcase his talents and performance on a national level. BeitMisk has expressed its excitement in sponsoring Tamer Ghandour this September by staying true to its family values and maintaining a firm belief that their trusted employee and skilled driver can triumph and succeed in the upcoming rally. Evidently, BeitMisk’s involvement has not just made Tamer’s dream of victory seem like a reality; it has been very much a case of support to a young man’s passion and an excellent initiative by a socially responsible entity.