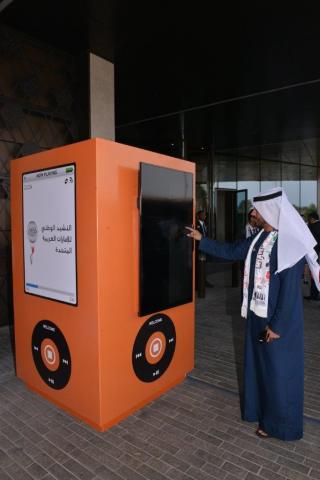 Al Hilal Bank is inviting the entire nation – most especially its energetic youths – to celebrate the UAE’s bright future as it marks its 43rd National Day this year. The bank will focus on tapping the patriotism, passion and aspirations of the youth who embody the nation’s future through an exciting array of activities revolving around a unique ‘Raise Your Voice. Raise your flag’ campaign.

The campaign literally uses the ‘voice’ of citizens to proudly raise the UAE flag. As part of the initiative, Al Hilal bank will deploy stalls designed like iPods and a special Al Hilal Tour Bus to strategic areas across the UAE such as the Abu Dhabi Corniche.

The public are invited to sing or recite the UAE National Anthem in these special venues. The tour bus and the bus booths will include a ‘Flagometer’ iPAD tablet that will measure and record the volume of each singer’s rendition and also keep track of the number of people that have used the device. The louder a singer performs, the more units are added to a special scale. Based on the final scale collectively registered by the flagometers, the UAE flag will be raised above the skies by halogen balloons. 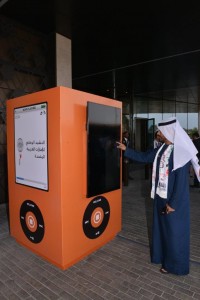 A special microsite will also accept voice inputs from online users. In addition, the public can go to Al Hilal’s online social media sites and use the hashtag #ItsAllAboutUAE to contribute to the campaign. The social media campaign will enable people to share photos or videos about the UAE and tweet their favorite lyrics from the national anthem.

Mohamed Jamil Berro, Group CEO, Al Hilal Bank said: “The common underlying theme of the annual UAE National Day festivities is the commemoration of the nation’s past. For this year, we wanted to celebrate this occasion the Al Hilal way by doing something different and unique that focuses on the future instead. As H.H. the late Sheikh Zayed Bin Sultan Al Nahyan once said, ‘the real prosperity of the state is its youth.’ The youth also happen to represent the promises and potentials of the future, and so our upcoming National Day activities will focus on stoking the patriotism, passion and aspirations of the young generation.”

“In the span of less than half a century, the UAE has risen to great heights and established itself as a model of prosperity, security and peace for the entire region and the world to follow. As we once again commemorate National Day this year, we invite all the citizens of the UAE, especially the young Emiratis, to join us in proudly raising the UAE flag high to the heavens. We have prepared a very meaningful and unique campaign for the public to express their love and loyalty for this great nation. UAE National Day deserves only the best and most joyful celebrations which Al Hilal Bank is very proud to be actively part of this year,” added Mariam Ahli, Head of Corporate Communications, Al Hilal Bank.

Al Hilal Bank was established in June 2008 with an authorized capital of AED 4 billion and is fully owned by the Abu Dhabi Investment Council, the investment arm of the Government of Abu Dhabi. The bank is Shariah compliant and operates through a network of 22 branches strategically located across the United Arab Emirates as well as 3 other branches in major cities of Kazakhstan. Al Hilal Bank aims to become the leading financial institution in the region and is committed to increase the growth of Islamic banking by providing new direction, new technologies and special services.