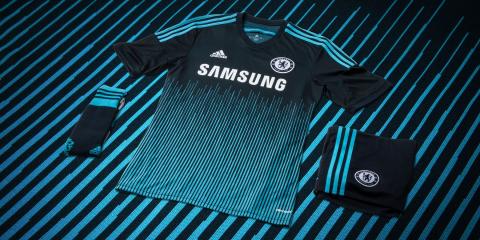 Beirut, July 23rd  2014 – Following on from the hugely successful Forever Blue campaign which launched the new 2014/15 home shirt in April and the new away shirt in June, adidas and Chelsea Football Club have today revealed the third kit for the forthcoming season.

The new shirt offers a fresh, youthful design that includes the first use of dark navy since 2009/10 when Chelsea won the Premier League and FA Cup double, the only other time the club have worn a dark blue strip.

The shirt features a sound wave graphic on the front, a design which symbolizes the volume of support from the fans at every away game.

The new shirt will be the lightest Chelsea third shirt ever produced, featuring the latest in adiZero lightweight technology and an electric blue, adidas Powerband across the upper back to aid stability.

The new kit will be available at www.chelseafc.com/foreverblue and in stores as of the 23rd of July 2014.

adidas is the global leader in football. It is the official sponsor / official supplier partner of the most important football tournaments in the world, such as the FIFA World Cup™, the FIFA Confederations Cup, the UEFA Champions League, the UEFA Europa League and the UEFA European Championships. adidas also sponsors some of the world’s top clubs including Real Madrid, FC Bayern Munich, AC Milan, Flamengo and Chelsea. Some of the world’s best players also on the adidas roster are Leo Messi, Gareth Bale, Mesut Özil, James Rodriguez, Dani Alves, Oscar, Xavi, Karim Benzema and Bastian Schweinsteiger. 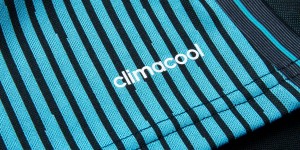 Chelsea Football Club is one of the world’s top football clubs. UEFA Champions League winners in 2012, Chelsea FC followed that success by lifting the UEFA Europa League trophy in 2013. Founded in 1905, Chelsea is London’s most central football club, based at the iconic 42,000-capacity Stamford Bridge stadium.

Nicknamed ‘The Blues’, Chelsea are three-time English Premier League champions and have also lifted the FA Cup seven times, the Football League Cup four times, the UEFA Cup Winners’ Cup twice, the UEFA Super Cup once and the Football League Championship once, in 1955. The Europa League triumph saw Chelsea become the first English club to win all three major UEFA competitions, and the first club ever to hold both the Champions League and Europa League at the same time.

Additionally, the Chelsea Foundation boasts one of the most extensive community initiatives in sport, working in 29 countries around the world, helping improve the lives of more than 700,000 children and young people each year.