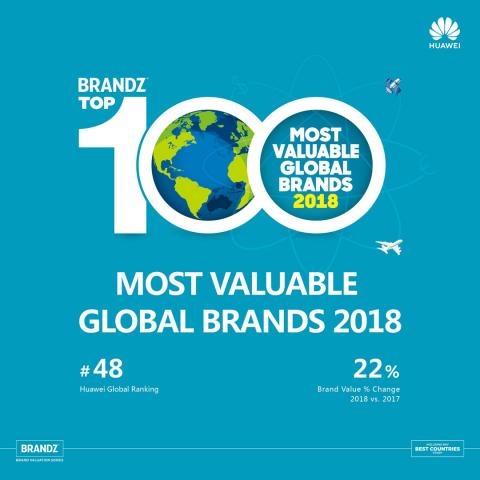 Huawei today announced that it has increased its brand value by 22% in the past year and now ranks 48th in the Top 100 Most Valuable Global Brands according to the latest BrandZ™ report. The annual brand study compiled by WPP and Kantar Millward Brown, notes that Huawei has now featured in the Top 50 global brands for the third consecutive year, as Chinese brands outperform their U.S. counterparts for the first time in the study.

Huawei is one of the world’s leading global technology brands today and with its increasing brand influence, it is the fourth consecutive year for Huawei on the BrandZ™ Top 100 Most Valuable Global Brands. The company’s brand value and ranking have grown steadily year-on-year thanks to the strong performance of smartphones, tablets and the brand’s global expansion.

The total brand value of BrandZ™ Top 100 reached US$4.4 trillion seeing an increase of 204% over the past twelve years. The total net growth of all listed brands is now close to US$750 billion with all categories achieving full growth for the first time on record. Technology companies by far lead the global list taking eight out of ten places in the Top 10, with a combined brand value of more than half (56%) of the total brand value of the Top 100 companies.

Chinese brands are undeniably the most eye-catching group in this year’s edition of the BrandZ™ report, now in its thirteenth year. Tencent, Alibaba and Huawei are just some of the leading names among the fourteen Chinese companies whose total brand value increased by 47% year-on-year. China’s brands have also seen their growth rate surpass that of their U.S. counterparts for the first time in the study.

The rising influence of Huawei has not gone unnoticed in other major brand studies. Last week, Forbes revealed its Most Valuable Brands of 2018 list in which Huawei, with a value of $8.4 billion, ranked 79th in the Top 100 as the sole Chinese brand. Earlier in February this year, Huawei was listed 25th on the Brand Finance Top 500 Global Brand Value of 2018 with a brand value of US$38.046 billion.

According to IDC, there were 336.1 million units shipped globally in the first quarter of 2018, down 2.4% year-on-year, showing an overall downturn in the global smartphone industry. However, despite an overall decrease in smartphone shipments, the average selling price of smartphones increased year-on-year by 21% to 374 US dollars, as reported by GFK.

As the third largest smartphone supplier in the world, Huawei did not only outperform the market, but also grew the market share steadily (11.7%). Moreover, the market share of Huawei’s high-end models (above $500 US dollars) increased to more than 10% driven in part by the breakthrough growth in key high-end regions such as Europe and the Middle East. Along with the global launch of the P20 series, Huawei has firmly established itself in the global high-end market and its brand influence has further improved.

According to Ipsos, in 2017, Huawei's global brand awareness and consumer consideration increased to 86% making it the fastest growing brand among global technology companies in the past six years. Brand perception and attributes such as technology leadership, design and trustworthiness have all gradually surged.

With its high-quality products and trend-setting technological innovations, Huawei is bucking the international industry trends as it gradually moves towards becoming a global iconic technology brand.

About BrandZ™ Most Valuable Global Brands

BrandZ™ Most Valuable Global Brands is the only brand valuation study to combine interviews with over three million consumers globally with analysis of the financial and business performance of each company. Now it is the world’s largest and most definitive brand equity platform.

Huawei Consumer Business Group (CBG) is one of Huawei's three business groups, providing a range of products including mobile phones, wearables, tablets and laptops. Huawei’s products and services are available in more than 170 countries, and are used by a third of the world’s population, ranking third in the world in mobile phone shipments in 2016.

Year on year growth was reflected in Huawei’s rise as a globally recognized premium brand. In 2017, Huawei was named number 49 on BrandZ’s Top 100 Most Valuable Global Brands, number 88 in Forbes World’s Most Valuable Brands and number 40 on the Brand Finance Global 500 Most Valuable Brands lists. In this year’s Fortune 500 HUAWEI climbed up the list to the 83rd place from the 129th of last year with a revenue of $78.51 billion, making the top global 100 for the first time.

As a leading technology company, Huawei invests a significant amount of its annual sales revenue to research and development efforts, and has established 16 research centers around the world. Among these facilities is the Huawei Aesthetics Research Center in Paris. Huawei’s newest R&D center is the Max Berek Innovation Lab in Wetzler, Germany, where Huawei and Leica are jointly researching technologies to improve mobile device camera and image quality.