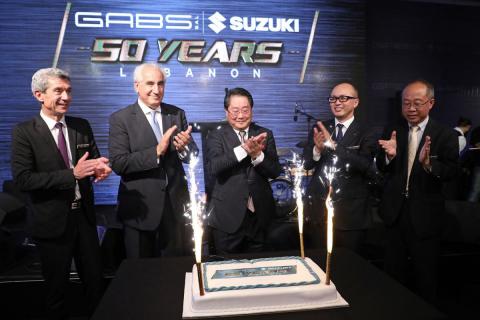 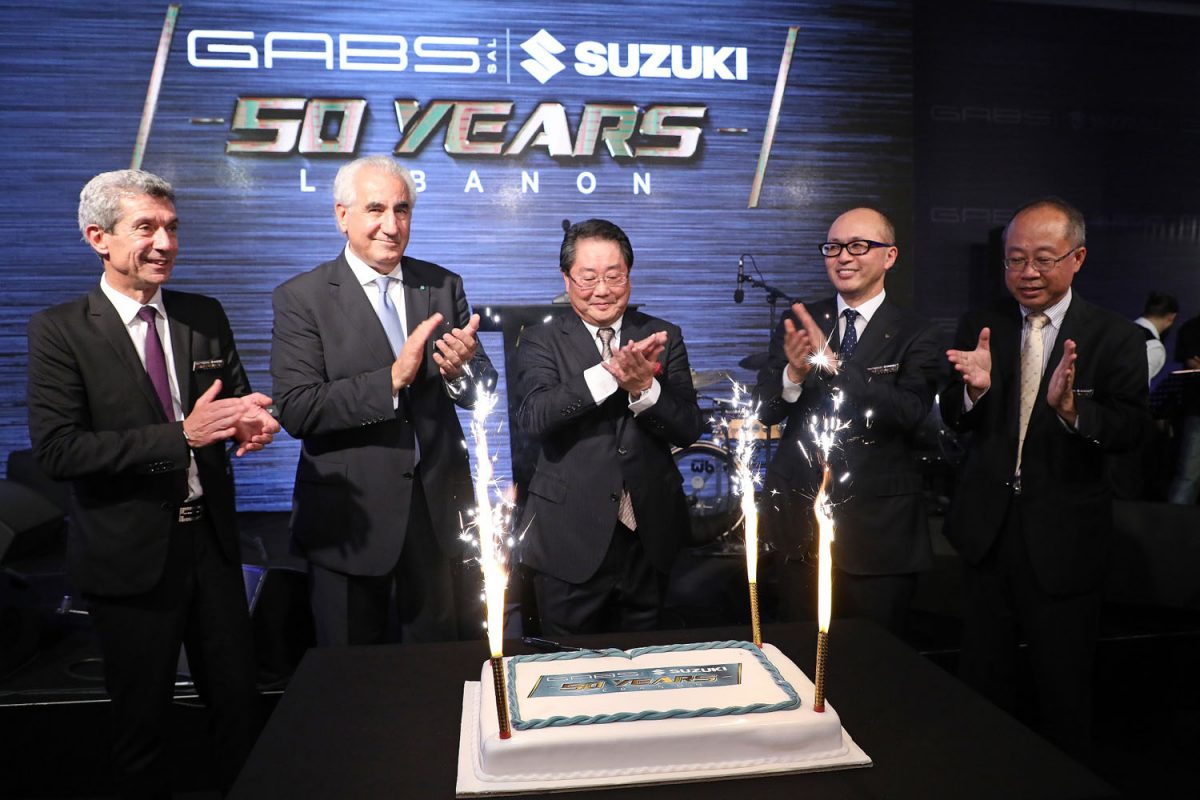 GABS “GA Bazerji & Sons”, the Exclusive Distributor of Suzuki vehicles in Lebanon, hosted the golden jubilee celebration to mark their successful partnership with Suzuki. The event took place at their branch located in Dora in the presence of the Chairman of the Board Mr. Nabil Bazerji, Mr. Assad Dagher, representative of the Dagher Hayek Group contributor to GABS, the Japanese Ambassador in Lebanon Matahiro Yamaguchi, the marketing director of Suzuki Mr. Kenji Saito alongside a number of political, social, military and economic figures as well as other partners, customers, friends and media people.

The Lebanese national anthem was heard at the opening of the ceremony, followed by a display of Suzuki cars brought by GABS, including the first car that was imported to Lebanon since the beginning of their partnership which dates back to the year 1968. In fact, the Bazerji family has been working in the automobile industry for a century now; their career began with them selling car accessories, tires and spare parts, before becoming the exclusive distributors of the world's leading brands such as Suzuki and Maserati.

Furthermore, Mr. Nabil Bazerji, Chairman of GABS, delivered a speech to the public, in which he said: “Our relationship with Suzuki began fifty years ago, in 1968 to be precise, when my father Gabriel Bazerji shipped the first Suzuki car to Lebanon. Together, GABS and Suzuki were able to make a big difference in the Lebanese car market by selling 50 cars a month. Moreover, the Japanese company has a solid reputation in producing the perfect cars suitable for all regions and conditions, and today, we constitute 5.4 % of the domestic market, not to mention that Suzuki has scored the highest sales in the Middle East.”

Suzuki Marketing Director, Mr. Kenji Saito also had a few words to say concerning the event: “It is a great honor for me to participate in the celebration of the golden Jubilee of GABS and Suzuki here in Beirut. After fifty years of success, we only hope to keep witnessing a spectacular growth in sales. We started half a century ago with a few cars, today we are an important figure in the Lebanese market and we owe it to GABS and its entire team to make Suzuki one of the top selling cars in Lebanon.”

The golden Jubilee celebration coincides with GABS winning three awards from Suzuki, which are the following: "Highest Market Share", "Most Consistent Marketing" and "Highest Repair Order Growth" in the Middle East. Consequently, Suzuki has witnessed a significant development in Lebanon through GABS, which has successfully marketed Suzuki cars at its three major branches with the additional help of seven other dealers who have contributed directly to Suzuki's 21% year-on-year sales growth to form one of the fastest growing car brands, which reaffirms the brand’s high quality customer services, also taking into account the appropriateness of its prices according to the Lebanese consumer, not to forget the large variety of car models it offers which meets every consumer’s needs.

Towards the end of the event, a cake was cut after Mr. Nabil Bazerji exchanged with the Japanese Ambassador and Suzuki delegation commemorative shields recognizing their contributions.