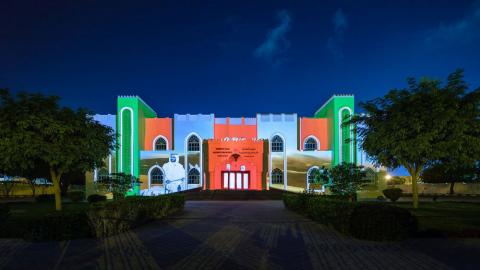 with captivating displays that transfer

audience to a fantastic world

We are keen to add new locations & use innovative technologies every year, says Al Midfa

UAE, February 14, 2018-  His Excellency (H.E.) Khalid Jasim Al Midfa, Chairman of Sharjah Commerce and Tourism Development Authority (SCTDA), emphasized on SCTDA’s keenness to shed light on the features of the East coast and the central region in Sharjah, especially its historical, heritage and tourism importance, and attract more tourists to those areas to showcase the unique and diverse tourism products the emirate has.

This came during Al Midfa’s visit to the East coast locations of the Festival, accompanied by a delegation from the Authority, where he followed up the shows that will be held in the Khorfakkan Municipal Council Building, the Directorate of Town Planning and Survey, the Sheikh Rashid Bin Ahmed Al Qassimi Mosque in Dibba Al Hisn, Kalba City Municipality Council, and the Directorate of human resources in Kalba.

Al Midfa added: “The Authority is keen to expand the geographical areas of the Sharjah Light Festival by adding new sites, as well as using new innovative technologies every year, to promote Sharjah as an ideal tourist destination fo big events and festivals which enhance its position on the global tourism map.

The Khorfakkan Municipality and Directorate of Town Planning and Survey are host to a distinctive canvas titled ‘Glowing Culture,’ designed by the famous artist Alice Haldenwang, which transforms the building walls into an interactive video presentation through a wide range of digital technologies. The projections of stunning abstract designs, fanciful curlicues and precise angular geometric drawings - all move over the two buildings as part of carefully curated shows highlighting the culture and growth of the emirate.  The light projection ‘breaks down’ the building and re-invents it with new domes and pillars in one set while another show’s more poetic scenes that elicit imaginative responses from the beholders.

The Festival will also deck the Directorate of Human Resources in Kalba with a show titled ‘Magic Wonder.’ This show combines space, sound, art, architecture, images and music in stunning combinations which pay tribute to the emirate’s dedication to culture and cultural pursuits.

Masjid Ammar bin Yasser at Al Dhaid showcases a special show under the name ‘Chromatic Lights’ by Pierre-Julien-Fieux, which mimics the natural light displays of the world. This dramatic show emphasizes the brilliance and importance of light.  Slow movements of light in a myriad of colors highlight the beauty of the Mosque and its architectural details while re-creating the atmosphere of the Aurora Borealis with fanciful, abstract designs, pulling the viewer into a dreamy world of illumination and magnetic fascination.

The Municipality Building at Al Hamriyah Town is host to a legendary visual display under the theme ‘Stellar Falcons’ by Esther Megard, celebrating the grace and prestige of the symbolic bird of the emirates with metamorphosing projections of patterns and forms as well as images of falcons and their trainers. The show focuses on the iconic bird, which is also a prized and beloved pet nowadays. An integral part of the emirate’s culture, falcons were also valuable resources during olden days.  Evocative images of the falcon and its skilled trainers are brought to the fore in this enigmatic show.

The Sharjah Lights Festival will run until February 17, 2018 in 18 locations in Sharjah, using advanced optical technology presented by 24 international artists from 10 countries. 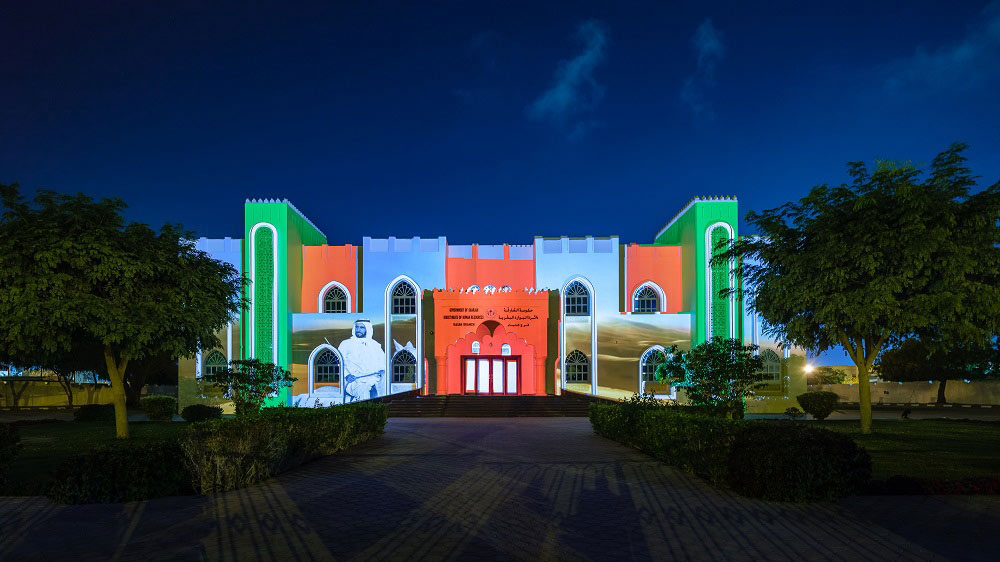