UAE, June 21, 2014- Dubai Smart Government (DSG) has announced the activation of electronic linkage between its Government Resources Planning (GRP) Systems and Dubai Islamic Bank (DIB) to fully automate the financial processes for government suppliers and salary payments; in line with its current strategy to shift to smart government and smart city.

This initiative is in line with DSG’s strategy to fully automate the procure-to-pay financial processes between Dubai government entities on one hand and suppliers on the other in the light of the DSG’s recent improvements of the GRP systems; which allow suppliers to send their invoices to these systems, make enquiries, access their own data and enter their commercial transactions online without the need for them to visit any of these entities. On the other hand, the full automation of electronic payment with DIB allows the competent staff at any government entity to send the due payments to suppliers and the salaries of the employees directly to the bank without any intervention on the part of the bank.

Commenting on the activation of the linkage with DIB, H.E. Ahmed Bin Humaidan, Director General of DSG, said: “Activating electronic linkage and fully automating payment between DSG and DIB are aimed at supporting the accelerating transition to the smart government pattern in implementation of the directives of His Highness Mohammed Bin Rashid Al Maktoum, Vice President and Prime Minister of the UAE and Ruler of Dubai, which call for completing the transition within the deadline set for it.” 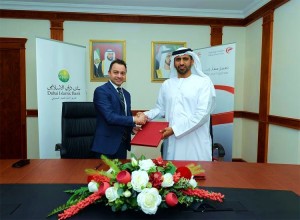 He added: “The GRP systems provided to government entities are vital infrastructure that they rely on for managing their core resources, help increase productivity, save the time and effort of government entities and suppliers, and support electronic payment between the two parties. They also support the government’s shift towards a sustainable green environment by eliminating the need to exchange paper documents, minimizing the effect of vehicle movement, and providing a secure environment for paying money, thereby contributing to boosting the national economy.”

Bin Humaidan pointed out that this step allow the competent staff at the government entity to encrypt and send payments (suppliers’ payments or entity employees’ salaries) to the bank as soon as they are entered into the GRP systems so as to reach in real time without any delay, relying on the government service bus, which provides the latest and most secure technologies without any intervention on the part of the staff.

Meanwhile, Dr. Adnan Chilwan, CEO of DIB said: “DIB is fully committed to advancement and innovation in Islamic Finance. We were the first to introduce this phenomenon nearly four decades ago and our heritage and vintage ideally positions us to show the modern face of Islamic Banking to the world. We see technology as a major factor in easing and improving customer interaction and with the large and multi-faceted entities like the Dubai Department of Finance (DOF); a well-integrated and customized corporate cash management platform not only improves quality and accuracy of service but also helps to minimize costs.”

Chilwan continued: “This is clearly a strategic alliance for us and is an integral part of our strategy to align ourselves with Dubai’s “Smart Government” initiative. We are strong advocates of the Government’s plans and strategy around building a modern and sustainable society focused on the highest standards of customer service seen anywhere in the world.”