22 May 2014 -  Beirut – Replacing the ever-popular BMW 3 Series Coupé was never going to be an easy task; but the BMW 4 Series Coupé is proving to be more than up to the challenge. Since its launch in the fourth quarter of 2013, Bassoul-Heneine SAL, the BMW group importer in Lebanon, has delivered 61 units, highlighting the model’s success within the Lebanese market.

Representing the fourth generation of BMW’s mid-size coupé, the all-new BMW 4 Series Coupé embodies the sporty nature of the premium segment in every aspect of its design, performance and dynamics. The ‘4’ in its model designation signals outstanding styling and positioning while emphasising not only its standalone design, but also an even greater technical differentiation from the BMW 3 Series. 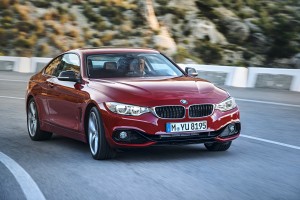 The muscular and purposeful design of the all-new BMW 4 Series Coupé highlights its dynamic abilities. Exterior features have been developed to highlight the vehicle’s sporting pedigree, starting with a large, wide air-intake in the front apron which accentuates the vehicle’s increased width. This is capped at both ends by apertures for aerodynamically motivated air-curtains which are complemented by air-breathers located just behind the front wheels.

Xenon headlights are standard, while Adaptive LED twin headlights are optional – they  team up with the slightly forward-slanting BMW kidney grille and twin round circular headlights which make the new 4 Series Coupé instantly recognisable as a BMW.

Commenting on the success of the BMW 4 Series Coupé, Mr Nagy Heneine, General Manager of Bassoul-Heneine SAL, said: “The BMW 4 Series Coupé comes with a completely new design, impressive technological features as well as choice of power options. All these factors contribute to making the vehicle a resounding success in our market – as our 6 months sales figures show. We are confident that this all-new coupé will continue to grow in popularity; further boosting our positive results.”

The sporty character of the BMW 4 Series Coupé is equally apparent in the car’s rear. Horizontal lines and L-shaped LED taillights spaced very far apart combine to emphasise the car’s muscular wheel arches and wide track. Another distinctive element in the rear design is the bumper. Its distinctive trim element made of satinated aluminium – echoing the threefold division of the front air inlets – also emphasises the rear’s width. The two tailpipes are enclosed by the bumper, and are flanked by small upward sweeps for added dynamism and sophistication.

Once inside, the interior of the BMW 4 Series Coupé is dominated by BMW Individual colours and materials which ooze luxury. Black and Schiparelli Brown as well as sustainably tanned leather radiate exclusivity and sporting appeal, while the clever use of superimposed design lines and surfaces emphasise the model’s outstanding dynamic ability. In addition to a discreet embossed ‘BMW Individual’ designation on the upholstery and entry sills, the seats have decorative hand-plaited leather elements running along the seat edges that are echoed on the foot mats and leather cup holders. Not restricting user customisations, the BMW 4 Series Coupé will have alternate interior options under the ‘Sport’, ‘Luxury’ and ‘Modern’ lines as well as the M Sport Package.

The new BMW 4 Series Coupé deploys a unique combination of driver assistance systems and mobility services – available as standard or as an option under the BMW ConnectedDrive banner – to set the benchmark in terms of safety, comfort and infotainment. These include the latest BMW Professional Multimedia Navigation system, Head-up Display, Driving Assistant, Active Cruise Control with Stop & Go, Lane change warning system; glare-free High-beam Assistant, Park Assist and Dynamic Safety. Collectively, these help to keep the driver more alert, reducing the possibility of accidents and minimising the consequences should one occur.