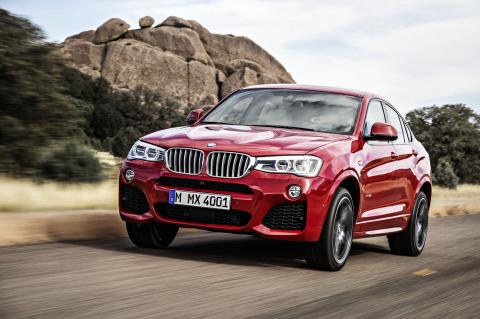 The new BMW X4 blends the hallmark features of the successful BMW X family with the sporting elegance of a classical coupe, and introduces the unique Sports Activity Coupe concept to the premium mid-size segment. Its dynamic pedigree is underlined by a wide range of cutting-edge high-performance engines, the xDrive all-wheel-drive system and an exclusive spread of standard equipment features such as variable sport steering, Performance Control and a sports leather steering wheel with gearshift paddles. 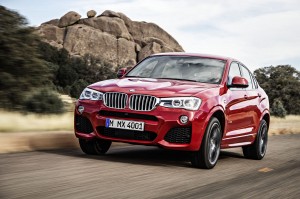 The new BMW X4 is based on the technical blueprint of the BMW X3, but displays an extroverted sporting character, taking dynamics to a whole new level. The large air intakes positioned on the outer edges of the front end and the character lines in the front apron allow the BMW X4 – with its signature BMW twin headlights and front fog lamps (both optionally with LED technology) – to maximise its visual presence on the road.

The roofline reaches its highest point above the driver and then swoops down smoothly to the trailing edge of the tailgate, mimicking the design language of a classical sporting coupe. The signature moulded lines running along the side of BMW models is split into two on the X4. The first section rises dynamically from the front wheel arches to the rear door handles, while the second part draws the eye to the muscular sculpting of the rear wings. The rear end, complete with L-shaped LED lights in exclusive X4 design and diffuser-look styling, likewise highlights the outstanding dynamic ability of the new BMW X4 – even before it turns a wheel. 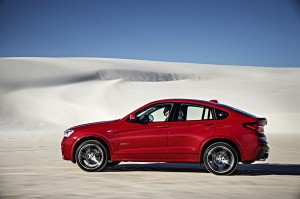 The driver and front passenger sit 20 millimetres lower than in the BMW X3. In conjunction with the two-seat look of the rear, this accentuates the coupe character of the new BMW in the classy and exclusive interior as well. At the same time, the X4 offers generous levels of space for up to five people and – thanks to the standard split rear seat backrest – impressive variability. 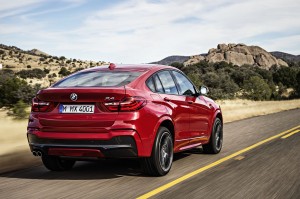 In keeping with the energetic character of the new BMW X4, customers can choose from three petrol engines and a trio of diesel units from the BMW EfficientDynamics engine family, with outputs ranging from 184 hp to 313 hp. All the engines meet the EU6 exhaust gas standard and the BMW TwinPower Turbo technology of the state-of-the-art engines offers a promise of superb performance married with exceptionally low fuel consumption. The flagship petrol unit of the BMW X4 xDrive35i develops an outstanding 306 hp and requires just 5.5 seconds to sprint from 0 to 100 km/h. And an equally impressive performer in terms of power delivery and CO2 efficiency is the diesel version of the BMW X4, the xDrive35d. Its 3.0-litre six-cylinder in-line engine generates 313 hp. The BMW X4 xDrive35d accelerates from 0 to 100 km/h in 5.2 seconds.

The unparalleled BMW EfficientDynamics technology package also minimises the fuel consumption and emissions of the new BMW X4. Included are features such as the Auto Start Stop function and coasting function (if an eight-speed automatic gearbox is fitted), Brake Energy Regeneration and on-demand operation of supporting units, ensuring an admirable degree of environmental compatibility to go with maximum driving pleasure. Also available as an option to add further efficiency to the mix are fourth-generation reduced-rolling-resistance tyres, which reduce the CO2 emissions of selected variants of the BMW X4.

The BMW ConnectedDrive features available for the new X4 allow BMW to restate once again its leadership in the link-up of driver, vehicle and outside world. Among the highlights in the new BMW X4 are the full-colour BMW Head-Up Display, the anti-dazzle High Beam Assistant, and Driving Assistant Plus including Lane Departure Warning, Active Cruise Control with Stop & Go function, preventive pedestrian protection and a Collision Warning system, which applies the brakes with anything up to maximum stopping power as required.