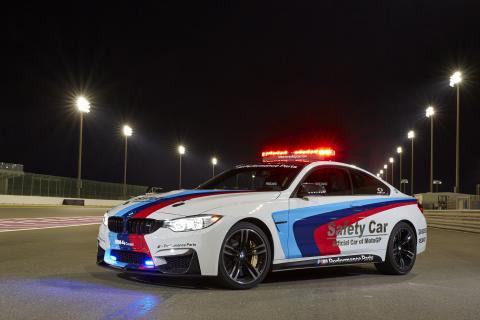 31 March 2014 - Beirut - The 2014 season of the MotoGP World Championship took place in March and long-term partner BMW M Group is once again on board. The group’s 16th season as “Official Car of MotoGP” began with the Qatar Grand Prix in Doha and has been involved in MotoGP since 1999, providing the fleet of official cars.

The MotoGP World Championship is motorcycle racing at its best and will once again enthrall millions of fans around the world in 2014. Since 1999, BMW has been the “Official Car of MotoGP”, helping keep the racetracks of the Motor Cycling World Championship safe all over the world. There are 19 races on the calendar this year, with the season starting on the 23rd of March in Qatar and finishing on the 9th of November in Valencia. MotoGP organiser Dorna Sports has entrusted BMW M Group as a reliable partner to have at its side once again throughout the season to keep the world's best motorcycle riders safe.

BMW M Group presented its first highlight of the year with the debut of the all-new BMW M4 Coupé safety car at the season-opener at the “Losail International Circuit”. It will be the first year in which the BMW M4 Coupé with M performance accessories will be used as the Safety Car. The latest high-performance coupé leads the safety car fleet in the 2014 MotoGP season. It combines motorsport genes with unlimited road capability in a highly-emotional overall concept. 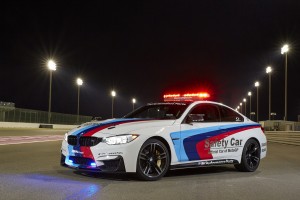 The inline six-cylinder engine with M TwinPower Turbo technology was developed from the ground up, generating a peak output of 431 hp and allows the BMW M4 Coupé to accelerate from 0 to 100 km/h in just 4.1 seconds. The innovative cooling system is a statement that this high-performance coupé was designed for the ultimate driving dynamics used on the racetracks of this world. 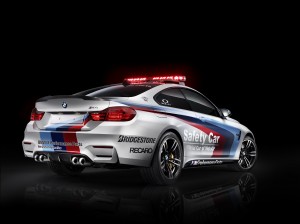 The BMW M Performance Parts are used extensively this season, including the titanium M Performance exhaust system with carbon finishers, used for the first time. Furthermore, carbon components, such as the M Performance front splitter, rear diffusor and rear spoiler optimise the aerodynamic properties of the BMW M4 Coupé Safety Car and the consistent use of lightweight materials reduce the overall weight of the car. LED lights on the front skirt and the roof, and the exclusive insignia ensure that this high-performance car is clearly a safety car. 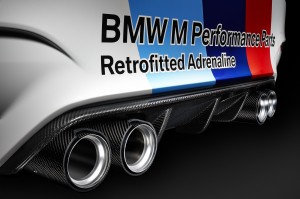 Providing the M fleet remains the focal point of the partnership with Dorna Sports, but there are many other important aspects to its involvement at Grands Prix. These include the BMW M Award, which will be presented for the twelfth time in 2014. At the end of each MotoGP season, this award is presented to the rider with the best qualifying results. Last year, Spanish MotoGP rookie Marc Márquez became the youngest winner in the history of the award and was presented with a BMW M6 Coupé in an exclusive “Frozen Black Metallic” racing color at the season finale in Valencia, Spain. This season’s top qualifier can once again look forward to a genuine highlight however, the actual model will not be revealed until the start of the European MotoGP season in Jerez, Spain.