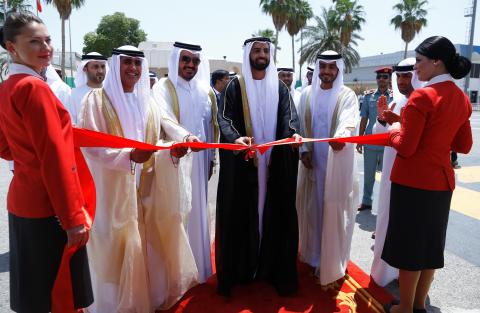 The official ceremony, which was also attended by Royals, senior officials from Ras Al Khaimah, trade community and press marked the launch of Air Arabia operations from Ras Al Khaimah International Airport.  Earlier on the same morning, Air Arabia’s inaugural flight departed from RAK International Airport, travelling to Jeddah in Saudi Arabia. At the ceremony, Air Arabia and Ras Al Khaimah DCA said both are committed to using the start of this service to further strengthen travel and tourism sector of the emirate.

Today’s launch of operations follows the recent establishment of an Air Arabia hub at RAK International Airport, which is the airline’s fourth international base, and second in the UAE. Two new Airbus A320 aircraft have now been based in Ras Al Khaimah International Airport, following a strategic partnership signed between the airline and Ras Al Khaimah Department of Civil Aviation. Air Arabia launch routes include direct services to Jeddah in Saudi; Cairo in Egypt; Muscat in Oman; Islamabad, Lahore and Peshawar in Pakistan; Dhaka in Bangladesh; and to be followed by Calicut in India.

His Excellency Engr. Sheikh Salem Bin Sultan Al Qasimi, Chairman, Department of Civil Aviation (DCA), Ras Al Khaimah said: “Today we mark another milestone in the UAE aviation success and growth journey. Our partnership with Air Arabia will allow us to increase the accessibility of Ras Al Khaimah to international passengers, whilst also increasing the flow of tourism to the Emirates, which will have a direct effect on the local economy. This step further signifies the important role we place in developing the aviation scene in the emirate which in return will support the ambitious plans we have set for developing the emirate’s tourism and business sectors.”

Sheikh Abdullah Bin Mohammad Al Thani, Chairman of Air Arabia said: “We are delighted to extend our reach across the UAE through our new hub in Ras Al Khaimah and this partnership marks an exciting new era for air travel in the Emirates. The establishment of our operations in RAK International Airport testifies the synergy between the emirate’s tourism expansion plans and Air Arabia’s ambitious route expansion strategy. We look forward to extending our routes from RAK as we continue to make travel more convenient for people living and working in the Northern Emirates.”

Air Arabia’s first flight from RAK International Airport took off to Jeddah on May 6 at 08:25 am followed by a second flight to Muscat at 10:25 on the same day. The carrier will offer some 25 weekly launch flights from its new Ras Al Khaimah hub to Jeddah, Muscat, Cairo, Islamabad, Lahore, Peshawar and Dhaka. For more information about the flights schedule and launch fares, visit www.airarabia.com.

The Department of Civil Aviation, Ras Al Khaimah is responsible for operation and regulation of the air transport system in Ras Al Khaimah. The DCA was established in 1974 to support the Emirate’s economic and social development.