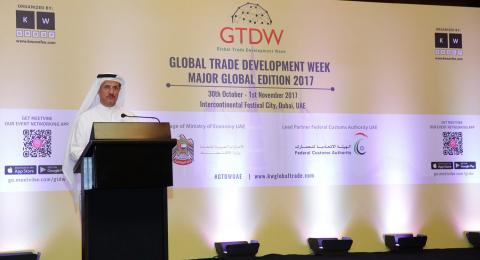 H.E. Engr. Sultan bin Saeed Al Mansoori, UAE Minister of Economy, inaugurated the 4th Global Trade Development Week, hosted by the UAE until November 1, 2017. The event is organized by the Ministry of Economy in partnership with the Federal Customs Authority.

The inauguration was attended by H.E. Abdullah Bin Ahmed Al Saleh, Undersecretary of the Ministry of Economy for Foreign Trade and Industry, and H.E. Dr. Mukhisa Kituyi, Secretary-General of the United Nations Conference on Trade and Development (UNCTAD).

Global Trade Development Week is gaining higher importance and a bigger turnout of international institutions involved in supporting global trade liberalization in light of challenges facing international trade movement. The event is particularly important as it provides a platform for discussions and consultations prior to the World Trade Organization Ministerial Conference in Argentina next December. 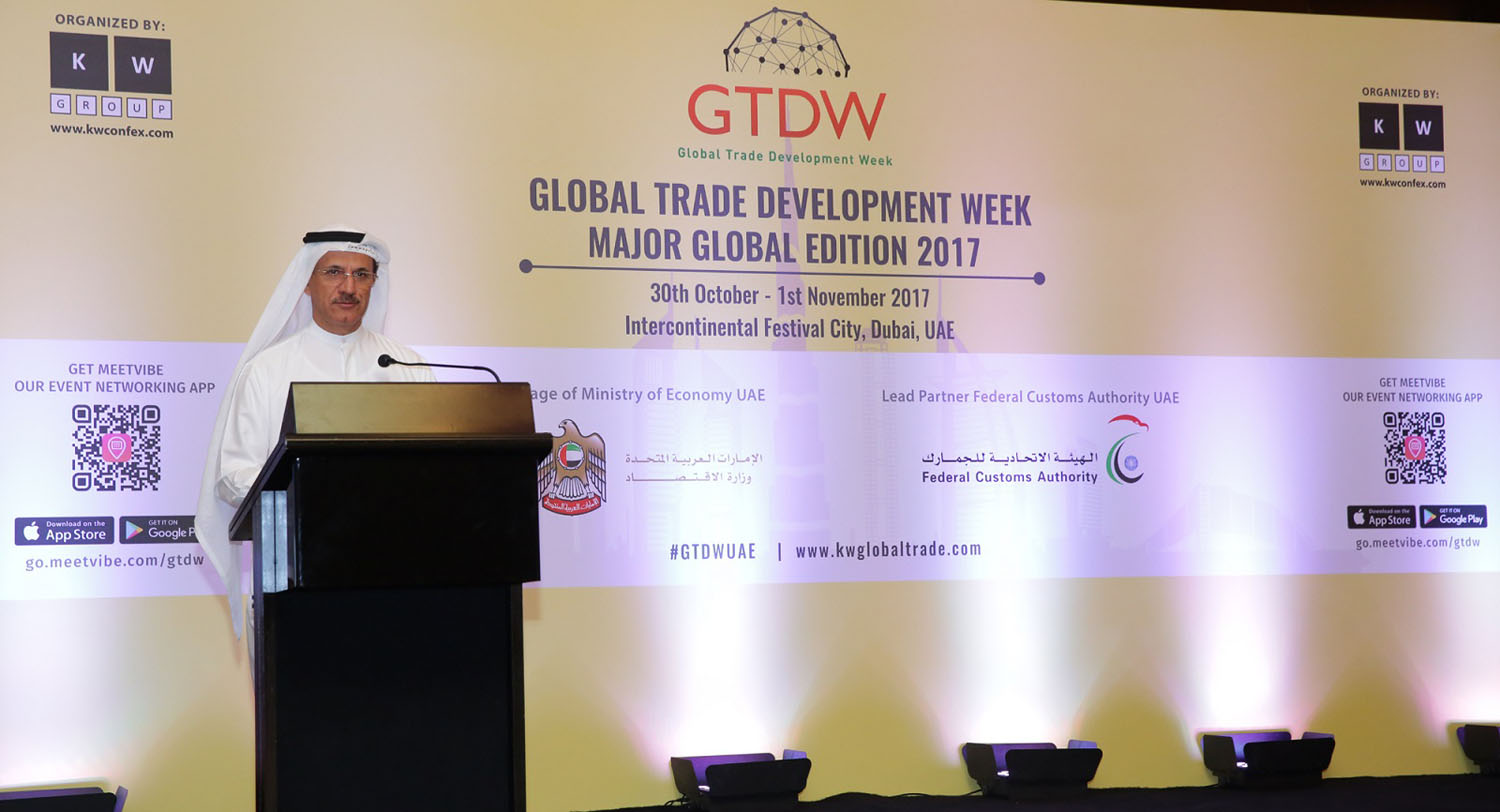 H.E. Engr. Al Mansoori said: “This conference is vital to exploring ways to guarantee the increased flow of transnational trade and better secure and manage global supply chains. The UAE is keen to play a positive role in the facilitation of smooth trade movement. The organization of this event under the patronage of the Ministry of Economy in collaboration with the Federal Customs Authority sends a clear message of this firm commitment. It reflects the vision of our wise leadership to adopt trade policies based on flexibility, openness, market freedom, and the removal of restrictions and barriers to the movement of goods and services.”

“The UAE is committed to the multilateral trading system principles as shown by its development of a favorable legislative system for businesses and trade activities. As the first Arab nation to ratify the World Trade Organization’s Trade Facilitation Agreement, the UAE continues to work towards the completion of the agreement’s requirements by streamlining transnational procedures and administrative systems and providing the necessary information and digital infrastructure,” H.E. added.

“Our national approach towards building a vibrant and dynamic foreign trade sector is consistent with the enablers and determinants of UAE Vision 2021 geared towards turning the UAE into a major regional and global business destination. We are optimistic about the improvement of domestic and global trade in the coming stage, especially following the enforcement of the Trade Facilitation Agreement at the start of this year,” H.E. said.

During the opening session, H.E. Dr. Mukhisa Kituyi, Secretary-General of UNCTAD, said that UNCTAD relies heavily on enhancing innovation and developing ideas and initiatives supportive of trade facilitation. He called for more efforts to stimulate global demand within the framework of ‘fair globalization’ which would benefit all individuals in developing countries and poor communities. H.E. Kituyi also pointed out to the importance of paying attention to the risks posed by political instability on cross-border trade and the need to work to ensure more trade facilitation accompanied with guarantees for promoting facilitating investments due to the strong direct correlation between them.

The Secretary General further called for more support for e-commerce, particularly in raising the awareness and confidence of individuals in it, and putting appropriate frameworks and standards in place to encourage individuals to actively participate in this sector.

In a videotaped message, H.E. Gurría thanked the UAE for inviting him to speak and pointed out the continued global economic slowdown and the failure to achieve the required recovery. He highlighted the importance of focusing on reducing trade costs and enhancing flow, as well as supporting and encouraging SMEs. H.E. also praised the signing of the WTO Trade Facilitation Agreement. H.E. Gurría further underscored the importance of achieving stronger global trade flows in food, manufactured goods, and services.

On the sidelines of Global Trade Development Week, H.E. Engr. Al Mansoori launched the ‘Trade Map’ forming part of the Ministry of Economy’s electronic and smart services. The Trade Map provides local, federal and government entities in the UAE with figures on the country’s non-oil trade with the world. It can display information by geography (continent, region, state, group of countries), classification and type of trade, as well as in terms of goods according to sections and chapters of the Harmonized System.

The map also reviews the implications of foreign trade, including the top trade partners for a specific year in terms of value, growth rate, and leading commodities.

On the sidelines of the first day of Global Trade Development Week, a seminar sponsored by the Islamic Development Bank was held under the title ‘Eleventh WTO Ministerial Conference... Regional Vision.’ The session was participated in by 12 representatives from Arab and Islamic countries along with institutions and federal and local authorities from the UAE. It coordinated the joint positions of the Arab and Islamic countries in relation to the 11th WTO Ministerial Conference which will be hosted by Argentina from December 11 to 14, 2017. The seminar provided an opportunity to exchange views and adopt a specific negotiation strategy to make the most out of any agreement in the upcoming Conference and avoid negative repercussions on Member States.

Ayesha Alkobaisi, the Ministry’s Director of International Trade, Organizations Sector Trade and Industry, emphasized that the Conference will witness three days of extensive discussions conducted through a series of key forums for ministers and government leaders. The event will include a Ministers and Trade Leaders’ Summit; a Customs, Compliance & Trade Facilitation Summit; a Financing Global Trade Summit; and a Trade Technologies & Trade Services Exhibition featuring 41 exhibitors from major international companies. There will also be several workshops and closed and public meetings and discussions with the participation of chief executives of major investment companies and major institutions such as Airbus, Microsoft, Shell, Louis, Louis Vuitton, Huawei Technologies, and Citibank.